The 2016 NFL Draft did not disappoint this year from the upgraded Draft Town set up to the drama that ensued literally minutes before the draft. Here’s a recap of this year’s draft, including some photos thrown in from this author’s adventure into Draft Town and the VIP Hospitality Tent.

Hours before Goodell would announce the first pick of the 2016 NFL Draft, fans would descend onto Draft Town presented by Oikos Greek Yogurt.

This year Draft Town organizers made sure to take fan experience into mind and expanded the whole setup making it feel more spacious and included a Ferris Wheel. There were of course the large helmets over every team and statues in full gear for fans to take photos with, seen in the pictures below: 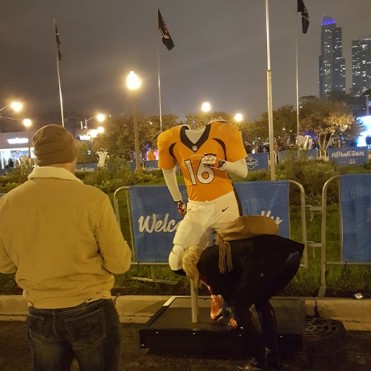 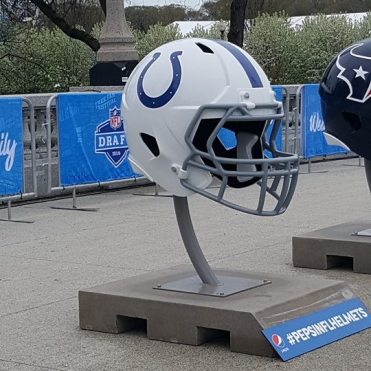 It was a surreal experience getting to watch the first round of the Draft from the VIP Hospitality Tent, which included a brief conversation with Gar Foreman, GM for the Bulls and a quick photo op with DeAngelo Williams of the Pittsburgh Steelers:

Now onto the first round of the Draft:

First let’s discuss what happened literally minutes before the draft started. Who would have guessed that a video of Ole Miss’ Laremy Tunsil with a gas mask on with a bong attached would survive literally ten minutes before the draft? That’s right no one. Tunsil, originally touted to go very high in the draft, would fall to 13th before being scooped up by the Miami Dolphins and things would only get worse from there.

While in front of the press, which every draft pick would end up doing, Tunsil admitted to a reporter that he had in fact taken money from a coach, thus thrusting Ole Miss into very hot water with the NCAA.Which the reporter was probably tipped about through a screenshot on Tunsil’s Instagram account that was also posted right before the draft. Of course Tunsil was wisked off stage by an NFL employee, who definitely needs a raise and off to then have an allergic reaction before speaking to the media in Miami.

(And yes I wish that this was a movie script, but no it really happened.)

Moving on to other notable surprises, yet none has mega as the Tunsil saga Myles Jack fell to the second round, Jared Goff was picked first overall to the Rams instead of Carson Wentz who would be drafted by the Eagles, and Bears fans were left scratching their heads as the Bears would trade up to only take Leonard Floyd. And the biggest surprise was the San Diego Chargers choosing Joey Bosa, who everyone thought would be calling Dallas Texas home next year. Also three Ohio State Buckeyes were chosen in the first round, which was wisely predicted by a young Ohio fan mere hours before hand.

Overall the 2016 NFL Draft first round was an insane experience and it only makes one wonder what on earth could happen next year to even come close to topping Laremy Tunsil?

I'm just a girl addicted to sports who happens to have a talent for writing. View more posts